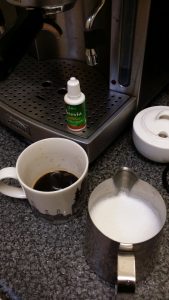 So for around a week I’ve allowed myself to have coffee again, and haven’t experienced any negative mood results immediately after. I’m putting this down to the 1.5 months I’ve had of at least half a teaspoon of genuine Himalayan sea salt twice a day – as recommended as a remedy for adrenal fatigue. Interesting as this is the same time period as someone in the Amazon book review mentioned in the podcast I talked about here.

Also other than coffee I’ve been adding good quality health food shop stevia to a teaspoon of cacao which tastes pretty dam good. Think I’ll stick to drinking it though.

So last night I looked further into Dr Clarks info. This was the first video which came up and is very interesting. Since I will be following this protocol, I want to learn the key parts of it as a priority. It talks about cancer and reminds me of Dr Burzynski, seemingly another proven cancer treatment squashed profit motives… ironic.

I listened to an interview with Kerri Rivera which gave a bunch more interesting info about how these parasite protocols work, and more info on Enemas. This interview referenced Dr Kalcker’s protocol, which I have re-read through. I’m pretty happy with how his protocol looks, mainly because it is more affordable than the Clark protocol and less closed source (in the sense that I have to get all the ingredients separately). His protocol also has lots of interesting info on other methods. The Garlic method seems pretty good, I’ve been having more than 3 cloves for the last couple days and have noticed a change in mood regulation as well as changes in how my stomach reacts – I think the Garlic is having a positive effect..
He mentions Pumpkin seeds, so why not collect them.

This site uses Akismet to reduce spam. Learn how your comment data is processed.